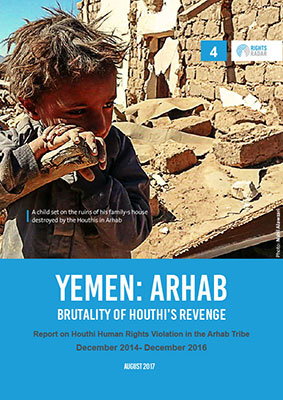 The 33 year presidency of Yemeni President Ali Abdullah Saleh led the country into an insurmountable situation of corruption that resulted in Yemen's position as the world's thirteenth failed state according to the American Peace Fund for failed states in 2011. Following these results, Yemen's cities have witnessed widespread popular protests calling for a new president. The Arhab Tribe, located north of the capital sana'a was one of the most prominent tribes that supported protester demands for a regime chang. The Arhab Tribe's support for the protests exposed them to the worst types of abuse by former president Ali Abdullah Saleh forces and armed allies such as the Ansar Allah movement or the Houthis. The government declared war against the Arhab Tribe during March 2011 - June 2012 as a result of the Arhab tribe's absolute refusal to use the army and security forces to ...

10 August 2017:
Rights Radar for human rights in the Arab world released on Thursday, 10 August 2017, a report on human rights’ violations in the Arhab tribe, northern the Yemeni capital Sana'a, under the name of (Yemen: Arhab, the brutality of Houthi's revenge), included the brutal violations during the period from December 2014 to December 2016, Some of which amount to (war crimes).
This report said that Rights Radar documented, 3,997 incidents of human rights violations on the Arhab Tribe by Houthi militia and Saleh forces during December 2014 to December 2016 have been documented. These violations ranged from extrajudicial killings, arbitrary detentions and detentions in private and secret prisons, torture and forced disappearances, house demolitions, looting of property and excessive use of force against civilians. The monitoring process of violations included the documentation of 41 civilian deaths, including two women and two children, and 57 serious injuries, including 3 injuries of women and one injury of a child.
The report said 11 people were subjected to attempts of murder, during in which 4 of them sustained serious injuries that resulted in permanent disability.
The report documented 849 cases of abduction and detention, including 19 children, in addition to more than 300 people who had been forcibly disappeared for months in unknown locations. The authorities did not disclose any information about them. Moreover, 81 detainees were subjected to physical torture, while the majority of detainees were subjected to cruel and inhuman treatment. More than 200 cases and 453 displaced families were permanently relocated to secure areas in eastern Yemen.
At least 268 cases of house raids and siege were documented, 39 cases of total houses destruction, 18 cases of partial damage and 6 cases of house occupation and turning into military barracks and secret detention centers, in addition to 148 cases of looting and confiscation of properties, including 118 cases of looting and destruction of vehicles and agricultural machinery.
The report also documented the bombing of 5 religious schools after the confiscation of its contents and the complete destruction of 2 of the headquarters of the Yemeni Islah Party. One case of mosque destruction along with 97 break-ins into public, private, village and residential facilities have been reported. In addition, 30 facilities have been looted by Houthi/Saleh forces. Moreover, the report documented 681 cases of violations falling within the framework of undermining State institutions and authorities.
This report documented also the violations that the women and children of Arhab Tribe have been subjected to wherein 71 cases of child recruitment have been monitored and documented. These statistics are incomplete because they do not cover every instance of violations committed on the Arhab Tribe for some cases were difficult to reach in order to be documented by the team. The team faced difficulties in finding the accurate number of victims, especially women and children, because of the dispersion of victims between forced displacement and displacement of people to unknown locations or locations that are difficult to access. The lack of accurate civil records of the population of the tribal villages was a main obstacle in defining the accurate number of victims as well.
The report concludes with an introduction, executive summary about the human rights violations in Arhab tribe and a set of conclusions and recommendations addressing various concerned parties.
This report is a part of series of periodic reports and publications issued by Rights Radar and will be published on the organization's website www.RightsRadar.org . It is also being disseminated through its social media platforms.
The data and information of this report come from Rights Radars’ field reporters and monitors inside Yemeni cities.
Rights Radar is a Non-Governmental Organization (NGO) that monitors, promotes and defends human rights in the Arab world. It was founded and run by a group of Arab human rights defenders and activists. We monitor, document and report violations against human rights, as well as provide advocacy and legal support for victims and capacity building for human rights activists. We cover all topics and areas of human rights, including media freedom and freedom of expression, women’s rights, children’s rights, disability rights, refugee rights and right to justice