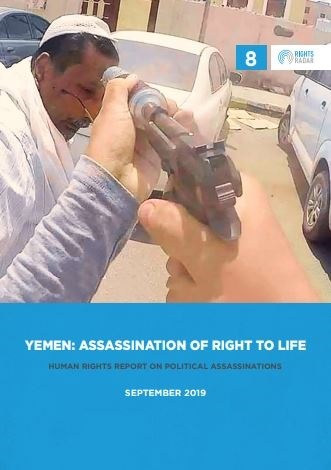 In its report on the political assassinations in Yemen entitled (Assassination of Right to Life) monitoring the assassinations during the report period from September 2014 to July 2019, Rights Radar states that “the victims of direct assassinations with live bullets reached 409, 34 persons with explosive devices and 8 persons with other methods”. In addition, 146 persons were injured in failed assassination attempts, including serious injuries.

The report shows that Aden Governorate comes at the top of the list of Yemeni governorates in which 134 cases of assassination were monitored. It is followed by Taiz Governorate with 113 cases , Sana’a with 42 cases, Abyan and Lahij with 32 cases, Al Bayda with 29 cases, Hadhramaut with 27 cases, Shabwah with 17 cases, Dhala with 16 cases, Ibb with 14 cases, Dhamar with 10 cases, Al Hodeidah with 4 cases, Al Mahwit with 4 cases, Ma’rib with 4 cases, and finally the governorates of Hajjah, Saada and Amran with 5 cases in each.

Rights Radar said that its report preparation team monitored hundreds of cases of assassination in Yemen and they had data concerning many of the assassination victims there. These data were provided by local monitors and some of them represented civil society organizations and the other monitors belonged to governmental and private health facilities.

The organization pointed out that the team sorted and checked these data according to precise human rights standards that can identify the real assassinations that comply with the legally recognized concept of assassination which is defined in this report. They excluded the victims of the military operations and the crimes with a personal criminal nature, as well as the accidental injuries which the circumstances show that the victim was not targeted, including the victims of stray bullets. They tried, as much as possible, to accurately identify the number of victims and their geographical and professional distribution.

The report states some recommendations for the concerned authorities locally, regionally and internationally asking them to work seriously to reduce the phenomenon of assassinations in Yemen. It calls on the Yemeni government to reorganize the work of the security services in accordance with the Yemeni law to be under the supervision of the Ministry of Interior in order to ensure the immediate commencement for taking measures concerning the prosecution and arrest of those who are involved in all assassination crimes. It also calls on supporting the National Commission to Investigate Alleged Violations to Human Rights to enable it to carry out its tasks on the investigation of the assassination crimes and allow it to access to the detailed information obtained by the security services, in addition to not covering up any abuses that affect the fundamental rights of the Yemeni citizens and ensuring that the perpetrators do not go unpunished.

Rights Radar also calls on the Yemeni government to address the United States about the reports of the American media on the presence of former US soldiers working as mercenaries to carry out assassination crimes in Yemen. It stresses the necessity to start an international investigation on the allegations about the UAE hiring of foreign mercenaries for carrying out the assassinations in Aden, and then the persons who are responsible for these crimes must be punished in accordance with the international humanitarian law and the international human rights law.

As for the Saudi-Emirati coalition in Yemen, Rights Radar urges them to take a clear position on the series of assassinations of Yemenis in the areas that are under the control of the coalition forces, particularly the UAE forces or the local forces acting in favor of the UAE in Aden Governorate and some other governorates.

Rights Radar’s report calls on the UN bodies and agencies to pay special attention to the phenomenon of assassinations in Yemen and take it seriously by considering it as a loss of the right to life and extrajudicial killings. In addition, these crimes establish an atmosphere that strengthens the existence of the permanent chaos and violence. It also calls on condemning all the parties involved in the assassinations and punishing them whether they were executive or guiding.