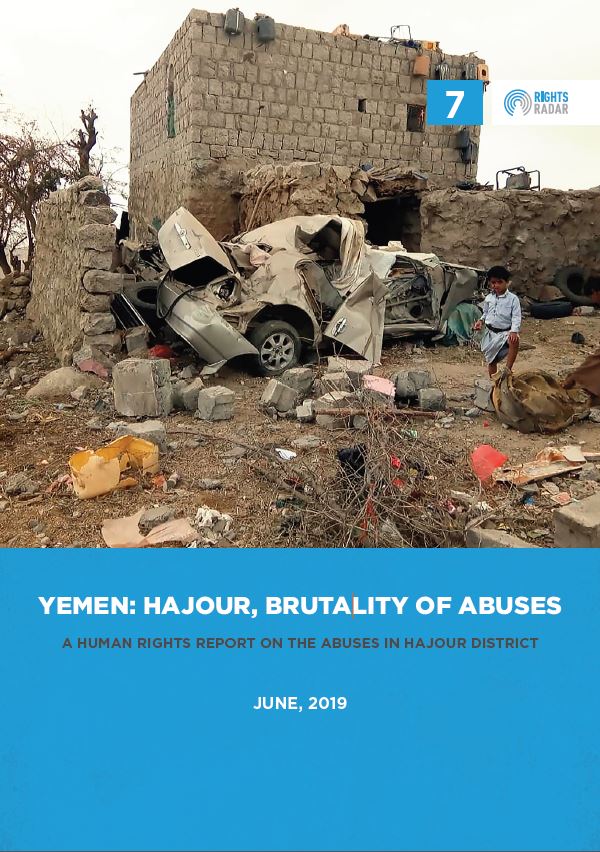 RR released this report entitled (Hajour: Brutality of Abuses), which reported that the Houthi gunmen committed hundreds of grave abuses against Hajour civilians during the first quarter of this year, including executions out of law, cold-blooded killings, arrests, torture, blowing up houses, confiscating private property and deadly siege.

The report documented 20,560 abuses committed against Hajour civilians in Hajjah Governorate, including murder, physical assaults, abductions, forcibly disappearance and displacement, in addition to destruction and shelling of homes and looting of facilities. These cases of abuses were documented by RR field team, which meet victims, relatives of victims, as well as eyewitnesses.

The 33-page report includes details of numerous cases of grave abuses such as brutal killings, arbitrary arrests, horrific torture that led to death, right deprive to life and the enforced displacement by forcing people to leave their villages. This is in addition to abuses against women, children, heads of families and depriving people from right to education, health, agriculture and business.

This is the first report in its kind that issued by a human rights organization about abuses in Hajour district. It reveals some of the most horrific violations in this district, in which it is still closed in front of media outlets and human rights organizations by the Houthi gunmen who have had the military control on it since the end of March 2019.

It also called on the Panel of Experts of the Security Council Sanctions Committee and the Group of Experts of the Human Rights Council to pay great attention to the abuses that committed in Hajour district which resulted in humanitarian tragedies in order to compensate the victims, protect civilians, so that such abuses cannot be committed again in Yemen that has been fallen in armed conflict since the end of 2014.