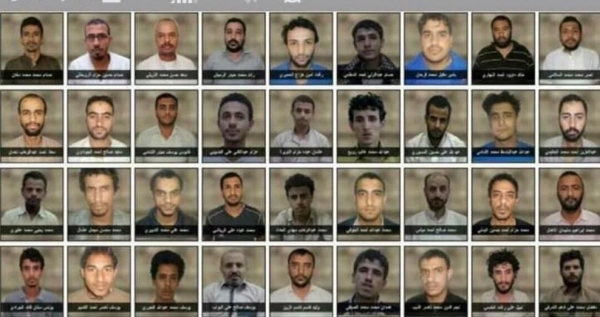 The Amsterdam-based Rights Radar Foundation for Human Rights in the Arab world, called on the international community to take a serious and urgent action to prevent implementing the execution against 30 civilian detainees in the prisons of Ansar Allah movement (the Houthi armed group) in Yemeni capital Sanaa, who were sentenced to death on Monday July8, 2019 through a judicial process that lacked fairness and legitimacy.

Rights Radar (RR) condemned these judgments issued by the Houthi group in Sanaa against 30 civilian detainees who were put in their detention centers for almost 4 years, ending with this shocking judgment of death penalty that described by Houthis as legal retribution.

RR said that these judgments were considered a dangerous precedent in the history of Yemen; particularly the illegal Houthi court decided that the execution of these prisoners would be implemented within 15 days from the date of their issuance. Most of those prisoners were university professors or students, employees or ordinary citizens who were arrested from their homes and workplaces.

RR has called on the international organizations, particularly the United Nations, to intervene urgently and seriously to prevent the Houthi group from committing this criminal massacre against those civilian detainees.

RR expressed its surprise at the silence of the international community on the issue of dozens of thousands of detainees from all warring parties for several years in Yemen as a tragic humanitarian issue as they are suffering the bad conditions in detention centers. Their bad situation requires serious and urgent intervention to save their lives, in particular, those who became victims of the armed conflict, just as a result of their living in the areas controlled by Houthi group.

RR also called on the United Nations envoy to Yemen, Martin Griffiths, and the United Nations; in general, to take urgent action to prevent the Houthi group from implementing the executions against the 30 prisoners who were sentenced in an illegal court, in addition that they did not have the basic rights to defend themselves during the hearing sessions.