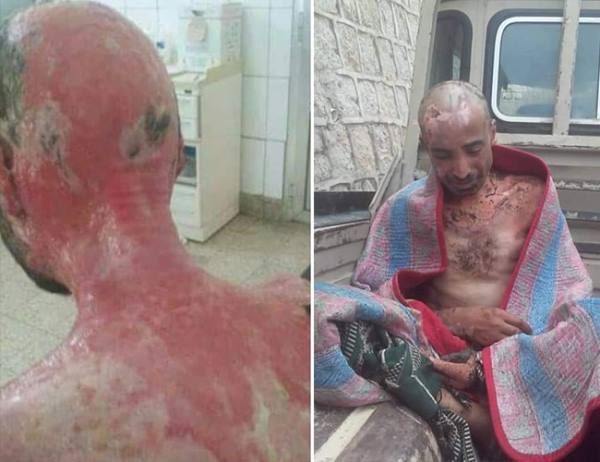 Yemen: UN Should Include the Issue of Torture Victims in the Mission of its Envoy to Save the Lives of Detainees

Yemen: UN Should Include the Issue of Torture Victims in the Mission of its Envoy to Save the Lives of Detainees
July 16, 2018:

The Netherlands-based foundation for human rights in the Arab world, Rights Radar (RR), called on the United Nations to include the issue of victims of torture and detainees, in the agenda of the Special Envoy of the UN to Yemen, Martin Griffith, to save the lives of the detainees after many of them lost their life.
RR said that the deaths under torture in the detention centers of the Houthi armed group in the northern provinces, as well as in the detention centers of the forces of the United Arab Emirates in the southern and eastern provinces has escalated frighteningly during the recent period, as the number of deaths under torture in these detention centers reached 121 cases of death, since the beginning of the war in Yemen three and a half years ago.
RR strongly condemned the torture of detainees and forcibly disappeared in the detention centers of the Houthi group and the UAE forces in Yemen, which in many cases amounted to death under torture.
RR reporters said June 2018 witnessed at least three cases of death under torture for detainees in Yemen, and the cases of death in the detention centers of Houthi and UAE in Yemen is on the rise. In addition to neglect and lack of medical care for detainees and forcibly disappeared.
They explained that on Friday, July 13, 2018, a very brutal tortured case appeared to the public after pedestrians found former detainee in Houthi detention center Muneer Mohammed Qaid Alkendi Al-Sharqi, 30, in the roadside after Houthi gunmen throw his body from a vehicle belonging to Houthi group. Al-Sahrqi arrived recently to Mareb city with his family for medication purpose after he got first aid in many other areas.
“The pedestrians found Al-Sharqi body in the first week of June 2018 in the roadside of Nakhlaa area in Shar’ab Al-Salam district, Taizz province, while he was in a miserable health condition after Houthi gunmen threw him there, as they believed that he had died. He was unconscious as a result for the severity of torture”, they added.
They reported that Al-Sharqi was abducted by Houthi gunmen in June 2017 from Ibb city, central Yemen, after he rejected to go with them to the battlefield of the western coastal areas. During his time in Houthi detention, he subjected to many brutal physical tortures, and he was almost to lose his life. Al-Sharqi is from Wosab district of Dhamar province.
According to RR reporters, the central prison of Dhamar city is overcrowded with large numbers of abductees and detainees, in over its capacity. Health risks for inmates in this prison have been compounded by the lack of healthcare.
At least six detainees from Dhamar province have died under torture in the detentions of Houthi group during the past period of war in Yemen. Some of them Houthi group refused to hand over their bodies except by written waiver from their families, to a hide the causes of their death as a method to escape from the prosecution of the Houthis group in the future after the end of the war.
The Houthi group is detaining a large number of detainees from several provinces in its prisons in Dhamar province. She set up new detention centers in public buildings there, including Alshouna detention in Maabar town, a detention of the community college, and a detention of the Aishan clinic, where detainees are subjected to a brutal torture by the Houthi militants.
RR documented the testimony of French citizen Maroc Abdelkader, who spent more than two and a half years in detention centers of Houthi group in Sana'a. Houthi gunmen abducted and detained Maroc in January 2016 until July 2018 from Sana’a International Airport while he was in his way to depart Yemen.
Maroc said in his testimony last Thursday, July 12, upon his arrival to Mareb city, 170 K.M. east of Sanaa, after Houthi released him, that the Houthi prisoners practiced various kinds of physical and psychological torture against him, some of them were visible on his body. They were forcing him to confess to fabricated charges and when he refused that, they resumed torturing him.
Maroc explained that during his detention time in the Political Security Office (Houthi Intelligence) in Sana’a, he saw a number of Yemeni detainees were tortured, including the well-known former prisoner Jamal Al-Maamari, who was subjected to paralysis and permanent disability as a result for severely torture by Houthis prisoners in Sana'a. He revealed that a US citizen, John Hamen, 45, died as a result of severe torture by the Houthi prisoners.
Hamen died two weeks after being arrested by Houthi militants upon his arrival at Sana’a airport by a UN flight in October 2015. The US Department of State confirmed in November 2015 that American citizen John Hamen died in Yemen.
The torture is a flagrant violation of the international laws. The article 8 of the International Criminal Code said that under the Statute of the International Criminal Court, torture and cruel, inhuman or degrading treatment constitute war crimes. According to article 85 of Additional Protocol I of 1977, the international humanitarian law prohibits torture in armed conflicts and constitutes a grave breach, serious violation, and war crime.