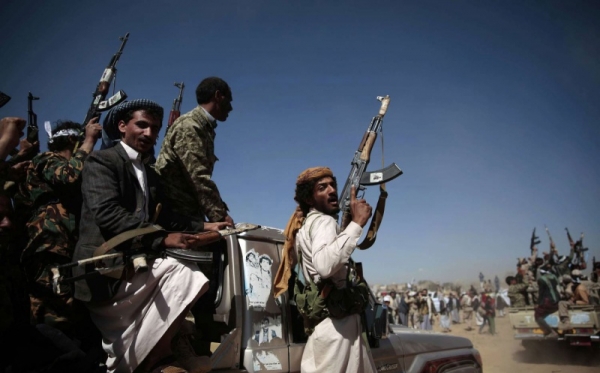 Yemen: Rights Radar Calls on UN Envoy to Immediately Intervene to Save 16 Civilian Abductees from Being Executed and Put an End to Suffering of Other 13 Abductees with Health Complications Resulting from Torture for Years.

Yemen: Rights Radar Calls on UN Envoy to Immediately Intervene to Save 16 Civilian Abductees from Being Executed and Put an End to Suffering of Other 13 Abductees with Health Complications Resulting from Torture for Years.

Rights Radar Organization for Human Rights, based in Amsterdam, calls on Houthi militia to cancel executions against 16 abductees and imprisonment against 13 others for periods ranging from 10 to 15 years. All of them belong to Saada Governorate, north of Yemen.

Rights Radar considers these executions as shocking and terrible acts because they were made on political basis like previous similar decisions issued by illegal and unconstitutional authority.

These decisions of execution were issued by an authority lacking legal and constitutional legitimacy according to the decision of the Supreme Judicial Council of the internationally recognized government issued in April 2018. It has abolished the Specialized Criminal Court of First Instance which is entirely under the authority of Houthi militia having extended its military influence over the capital, Sana'a, since September 2014. According to Resolution No. (15) of 2018, the Specialized Criminal Court of First Instance and the Specialized Appeal Division were transferred from Sana’a to Ma’rib Governorate, north-east of Yemen. As a result, all the decisions issued are considered invalidating.

Such decisions increase the concern of families of prisoners and abductees, as well as human rights activists, about the safety and lives of those abducted by Houthis. These decisions threaten the lives of those persons.

Above all, all those who are subjected to Houthi trials lack the most basic conditions of justice and there is no guarantee concerning the integrity of measures.

Our local human rights sources in Saada confirmed that most of those included by the decision of execution and imprisonment belonged to Sohar District. They were civilians, farmers, university students and educators who were abducted from their homes and farms without any justification during campaigns of raids and pursuit led by the Houthi leader Abu Hussein Shaim. Most of them remained forcibly disappeared for about one year and a half, during which they were subjected to various forms of torture and psychological and physical abuse. This made some of them confess these charges.

Due to pressure of media and human rights pressures demanding disclosure of the fate of abductees in Saada, Houthi militia referred some of them to mock trials during which they were deprived from the right to defend themselves against fabricated and malicious charges that were due to political reasons.

According to information obtained by Rights Radar, one of those victims called Saleh Ahmed Sagheer al-Qatwi died three years ago after he had left his hometown as a result of prosecutions.

There were also four other victims, who had decisions of execution in absentia, were forcibly displaced as a result of prosecutions and threats, namely:

Their homes and farms had been confiscated and seized by Houthi militia.

Likewise, there were four victims, who had imprisonment decisions, were also forcibly displaced, namely:

The following convicts suffered from health complications as a result of torture in Houthi militia’s prisons:

Based on the above information related to the health and humanitarian situation of all victims sentenced by the Houthis, Rights Radar calls on the international envoy to Yemen, Hans Grundberg, according to his legal and moral responsibility, to immediately intervene and save 16 civilian abductees from being executed and 13 others suffering from complications of torture in the prisons of Houthi militia.

Rights Radar also calls on international human rights organizations to exert sufficient efforts to save lives of abductees and end their suffering.

Rights Radar calls on the legitimate government to take responsible measures in favor of its abducted citizens, adopt a campaign aiming at saving abductees who are threatened with execution and put an end to their suffering in Houthi prisons.

Rights Radar also calls on all media and human rights organizations to adopt a wide campaign to create sufficient pressure for saving lives of all abductees in Houthi prisons and put an end to the victims’ sufferings from health complications due to torture and abuse.