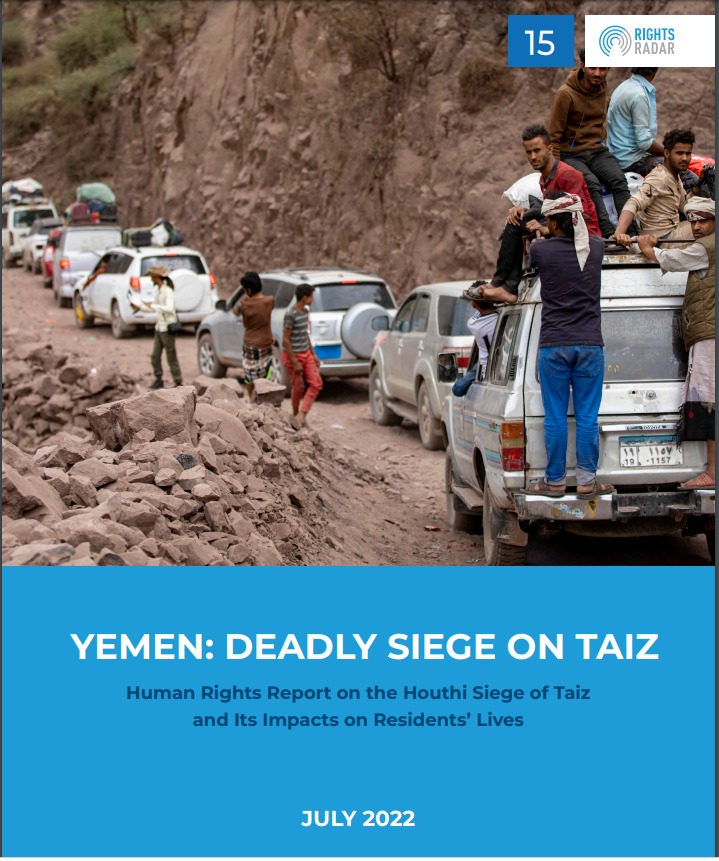 Yemen: Rights Radar Calls on International Community to put an End to 7-Year Houthi Siege on Taiz, Resulting in More Than 10,000 Deaths and injuries among Civilians

Rights Radar Organization for Human Rights based in Amsterdam, Netherlands, revealed that the victims of the Houthi siege imposed on Taiz Governorate from mid-2015 to mid-2022 exceeded 10,000 civilians, including 2,720 Deaths. This number becomes shocking when adding more than 27,440 cases of malnourished children, including deaths, as well as people with chronic diseases, who were directly affected by the siege, with a total number of 3,634 cases.

These statistics are included in a human rights report issued today entitled (Taiz, Deadly Siege). This report monitors and documents the sufferings and violations that affected the residents of the trapped areas in Taiz Governorate (both of urban and rural areas), including 7 districts, namely Salh, Al-Qahirah, Al-Mudhaffar, Jabal Habashi, Moqbna, Al-Taziah and Sabr Al-Mawadim during the period from May 2015 to May 2022.

The report methodology is based on research, investigation and field surveys, in addition to processes of checking and analyzing data and information conducted by Rights Radar Organization for Human Rights through its team of researchers and specialists who were rehabilitated and trained to conduct the interviews with 53 civilians, including 29 women and 24 men. The research team carried out 9 discussion sessions with focus groups of 85 civilians, including 37 women and 21 men.

In its statistical aspect and graphic analysis, the report is based on a database and accurate and comprehensive information that include the names of victims affected by the siege imposed on Taiz and the accompanying crimes and violations against humanity committed against civilians. It also has full details of each incident, including time and place.

The field team also visited all the crossings of Taiz and conducted interviews with a number of concerned officials, community leaders and activists, in addition to victims and travelers.

According to the monitored incidents, the report preparation team classified cases of suffering and violation into 8 topics, each of them included information and statistics reflecting the extent of suffering, namely:

Regarding figures and statistics, Rights Radar team documented the types of victims of Houthi siege and attacks in Taiz Governorate throughout the reporting period. The number of victims reached 285,445 cases, including victims of shelling, sniping, mines and killing at checkpoints, in addition to victims of lack of oxygen, traffic accidents resulting from using alternative unpaved roads. The Houthi siege also resulted in deaths of patients with cancer and kidney failure, in addition to victims of severe acute malnutrition among children who represented the largest proportion of these huge statistics.

Documented statistics indicate that 2,720 civilians have been killed or died in Taiz due to the siege imposed on it since the summer of 2015.

According to the documented official statements of the monitoring incidents, the number of children, who were victims of malnutrition in Taiz Governorate due to the siege, reached 27,4482 cases, including 12 deaths.

As for the victims of killing and death due to the siege, men had the highest number with 1,831 cases, followed by children with 470 cases, and then women with 225 cases, and the elderly people of both sexes came fourth with 194 cases.

According to the statistics, the killing cases due to Houthi shelling of Taiz reached 851, including 400 men, 246 children, 110 women and 95 elderly people.

The number of killings resulting from sniping reached 669, including 411 men, 125 children, 69 women and 64 elderly people.

The number of deaths and killings at the checkpoints reached 63, including 37 men, 10 children, 8 women and 6 elderly people.

The most suffering group affected by the siege of Taiz were the people with chronic diseases. The statistics documented by Rights Radar team stated that the number of people who died as a result of lack of medicines and disruption of the concerned centers due to the siege reached 664 cases, including men and women.

This was in addition to the number of victims of lack of oxygen in health facilities in Taiz that reached 57 cases, including 18 children, 7 women and 6 elderly people.

The number of travelers, who died on the alternative roads as a result of the siege, reached 142.

The number of injured people as a result of the above-mentioned violations reached 7,329 cases. This number does not include victims of malnutrition nor people with chronic diseases (cancer and kidney failure) which reached 3,634 cases, including 664 deaths during the years of siege.

Based on the incidents and violations, the report concluded with certain recommendations through which Rights Radar called on all the conflicting parties to ensure the strict application of the principles and rules of International Humanitarian Law in all military operations.

The conflicting parties must also ensure adherence, discipline and respect of all legal rules of International Human Rights Law and their application, along with the rules of International Humanitarian Law regarding the implementation of military and security operations. They also must respect all the agreements aiming at ceasing fire or reducing tension in order to pave the way for the peace process.

Rights Radar has called on the internationally recognized Yemeni government to protect and ensure the access of humanitarian aid and all supplies, needs and commercial goods to Taiz and remove all obstacles that prevent its entry or increase the cost of its access to the city, including stopping all forms of illegal levies and maintaining roads for large trucks.

Also, Rights Radar has called on the internationally recognized Yemeni government to facilitate and protect the movement of travelers to and from Taiz city, stop all forms of unjustified search and prevent the arbitrary measures and territorial discrimination of the residents of Taiz by military formations in the southern governorates.

Rights Radar has called for intensifying efforts to remove the mines laid in areas controlled by Houthi militia.

Rights Radar has called on Houthi militia to put an end to the siege imposed on the residents of Taiz, allow the access of humanitarian aid, supplies, needs and commercial goods through the city’s main crossings and remove all forms of obstacles, in addition to preventing the illegal levies.

Also, Rights Radar has called on Houthi militia to open the main eastern, western, and northern asphalt lines and crossings for Taiz city and allow the movement of travelers and goods to and from Taiz through those lines, crossings and main roads.

Rights Radar has called on Houthi militia to stop laying mines, remove the various mines and explosive devices that they laid in the areas under its control and provide the maps of mines in areas currently controlled by the legitimate government.

In addition, Houthi militia must also Facilitate the access of humanitarian aid and commercial goods to Taiz city and remove all forms of obstacles that prevent their access, including unjustified searches and complicated routine procedures.

Rights Radar has called on United Nations and its relevant bodies to use their international powers and influence to put pressure on all conflicting parties to stop the war and enter into negotiation that leads to a comprehensive peace agreement.

United Nations must put sufficient pressure on Houthi militia to put an end to its siege on Taiz city, stop laying mines and allow the entry of population and access of humanitarian aid and commercial goods to and from Taiz through its main crossings.

In addition, United Nations has to intensify efforts aimed at persuading all partners and donors to increase the volume of humanitarian aid provided to Yemen, especially Taiz city, to face the humanitarian catastrophe.

Also, United Nations must support programs and projects aiming at removing the indiscriminately laid mines to contribute to the disposal of all forms of mines and explosive devices resulting from the war in Yemen.