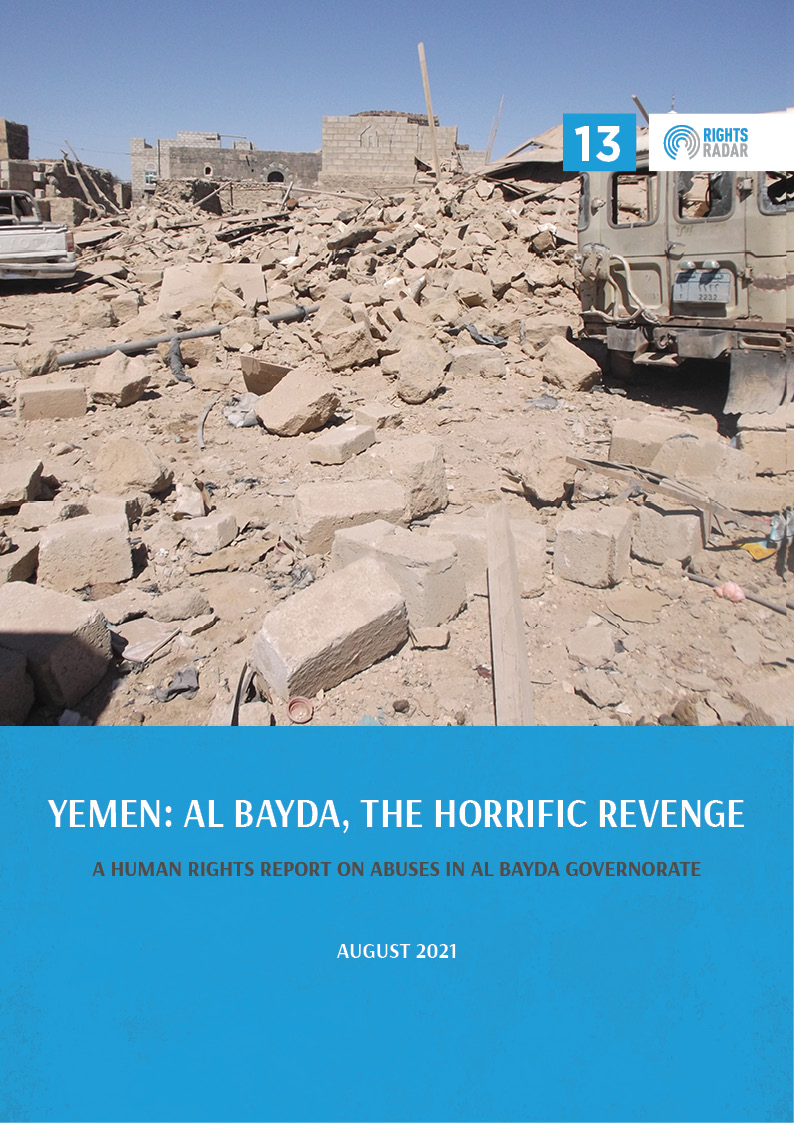 Rights Radar Organization for Human Rights, which is based in Amsterdam, Netherlands, revealed that it documented (5,559) violations committed against residents of Al Bayda Governorate during the period from late 2014 to the end of 2020.

In its human rights report entitled (Yemen: Al Bayda, Horrific Revenge) that was issued today, Rights Radar monitored and documented violations against citizens and property committed by various parties in Al Bayda Governorate during the period from late 2014 to the end of 2020. These violations were distributed to various districts.

These violations included cases of deprivation of life (killing), injury, abduction, enforced disappearance, in addition to violations to public and private property.

According to the report, Rights Radar’s monitoring team documented 725 killing cases. The Houthi militia came first by committing 537 cases. It was followed by al-Qaeda that that came second with 69 cases. Then, the U.S. forces came third with 66 cases. The Arab coalition forces came fourth with 27 cases. The Killing cases included killing by direct shooting, artillery shelling, or drones, in addition to landmines and sniping.

As for the injuries related to violation of the human rights to physical integrity, Rights Radar documented 649 cases of physical injury in the Al Bayda Governorate. The houthi militia came first with 543 cases, followed by al-Qaeda with 52 cases, Arab coalition forces with 26 cases, and U.S. forces with 11 cases.

The number of cases of violations related to personal rights and violation of dignity (enforced disappearance, arrests, and torture) reached 113 cases of enforced disappearance. The two parties that committed these violations were Houthi militia with 112 cases and al-Qaeda with one case. The number of abductees reached 2,160 cases. Houthi militia committed 2,157 cases of abduction, al-Qaeda committed two cases and there was one case committed by an unknown armed militia.

The violations related to psychological and physical torture during abduction and enforced disappearance reached 122 cases. All of these cases were committed by the Houthi militia due to its control over most of the districts in the Al Bayda Governorate.

The report of violations in Al Bayda Governorate included many examples of witnesses and stories that were told by a number of victims of these violations documented by Rights Radar. These witnesses reflected the sufferings experienced by the victims and they were away from the local and international human rights organizations and media attention.

For the purpose of preparing this report, Rights Radar formed a team consisting of legal specialists and experts who adopted the international and national standards for preparing human rights reports. It is based on the field visits to the place of violation for documenting it, interviewing the victims and their relatives, writing down their personal data and the witnesses of eyewitnesses of these cases, and documenting them according to forms prepared by Rights Radar in advance.

According to the violations included in this report and the field visits, the report’s preparation team concluded with a number of recommendations for the concerned parties. Rights Radar called on the legitimate government to activate mechanisms for monitoring and documenting violations committed against civilians in all governorates, including Al Bayda Governorate which is one of the least fortunate governorates in this aspect.

Rights Radar also called on the legitimate government to prevent the American airstrikes against Yemeni citizens in all Yemeni governorates, including Al Bayda. The legitimate government must also ensure that the persons involved in killing Yemeni citizens, whether in Al Bayda Governorate or other governorates, are prosecuted before judicial bodies locally and internationally so that the perpetrators cannot escape punishment.

Rights Radar called on Houthi militia to stop committing violations against civilians in Al Bayda Governorate and release all detainees, abductees, and forcibly disappeared persons. Houthis must also respect the local and international conventions and laws that criminalize violation of human dignity and life and adhere to the international conventions and treaties of human rights that were signed by Yemen.

Rights Radar called on the Saudi-led Arab Coalition to stop the airstrikes targeting Yemeni civilians, refer those who were involved in airstrikes resulting in civilian casualties to investigation and accountability bodies to take deterrent legal measures against the perpetrators of these violations, and provide victims with fair compensation.

Rights Radar called on U.S. administration officials to respect the sovereignty of Yemen and the dignity of Yemeni citizens by stopping any airstrikes and adhering to the concerned international conventions and agreements, seek to hold accountable all those who were involved in any airstrikes against Yemenis and compensate the victims, their families and those who were affected by violations.

Rights Radar called on the local and international organizations to document and monitor all violations of human rights in the Al Bayda Governorate and exert efforts in order to protect all the victims’ physical and legal rights. In addition, it called on the international community to put pressure on the conflicting parties in Yemen to stop the violations and ensure carrying out accountability against perpetrators so that they cannot escape punishment.

Yemen: houthi rebels intensify abuses after saleh’s killing
Oral statment of Rights Radar foundation and the International Institute for Rights and Development at the 45th session of the Human Rights Council in Geneva
Yemen: Rights Radar Calls on International Community to Put Pressure on Houthis to Release Four Journalists Facing Execution
Yemen: Mines Laying Causes 3,517 Death and Injury in 19 Governorates During War Time
Yemen: rights radar calls on the un to urgently put an end to the killing of detainees and journalists