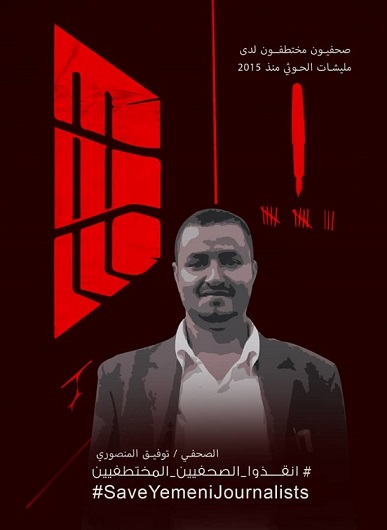 Rights Radar Organization for Human Rights based in Amsterdam, Netherlands, called on the Houthi militia to immediately release Tawfiq Al-Mansouri after his health condition had deteriorated in the Central Security Prison in Sana’a.

In a report that Rights Radar received a copy of it, journalist Tawfiq Al-Mansoori’s family said that their son suffered from asthma, shortness of breath, rheumatic heart, diabetes and benign prostatic hyperplasia. They added that he recently began to suffer from symptoms of kidney failure and that the Houthis refused his treatment or transferring him to hospital after his health condition had deteriorated badly.

Therefore, Rights Radar called on the Houthi militia to immediately transfer journalist Al-Mansouri to hospital to be treated and followed up for preventing any deterioration in his health condition.

It also called for releasing him and the other journalists against whom the Houthi militia issued death sentences last April.

According to the witnesses of the five recently released journalists, the journalists detained in the prisons of the Houthi militia were infected with Coronavirus in the Political Security Prison in Sana’a and they were left in prison cells to face their inevitable fate without any health care or prevention from the virus.

Rights Radar also called on Yemen to take the legal, moral and humanitarian responsibility towards detainees in prisons and respect press freedoms and the international charts concerning guaranteeing freedom of journalistic work.

It called on the international bodies and organizations concerned with journalists, especially the International Federation of Journalists, to put more pressure on all parties to make journalists be away from any political and military conflict that may affect their safety and lives.

Rights Radar also called on Martin Griffiths, the UN Representative in Yemen, to take clear actions towards the abducted journalists whose lives were threatened in the prisons of the Houthi militia and take into account the bad conditions that they faced in full view of the international community which was supposed to protect public freedoms, including freedom of opinion and expression.