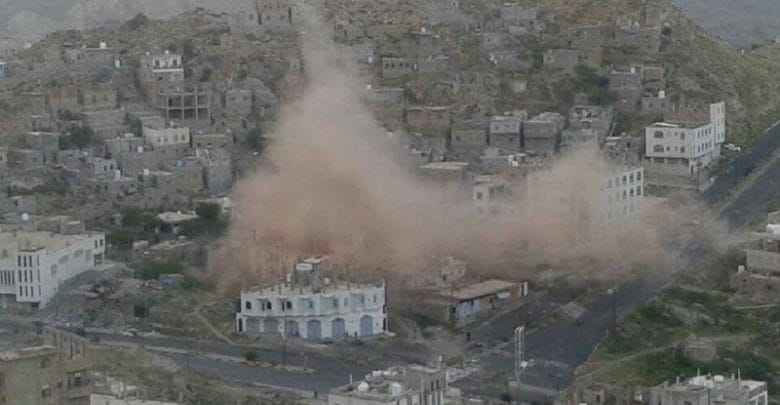 Rights Radar Organization for Human Rights based in Amsterdam, Netherlands, called on the international community to urgently intervene to put an end to the tragedy faced by the residents of Al-Haima villages, northeast of Taiz, south of Yemen.

According to reported information, some villages located in Al-Hima District was exposed to a military campaign carried out by Houthi gunmen against opposing civilians refusing to submit to their oppressive authority for ten days.

Eyewitnesses told Rights Radar that Houthi militia had surrounded the targeted villages for some days before storming them with about 70 military vehicles, including armored vehicles and heavy shelling with medium and heavy artillery.

According to local monitors, a number of armored vehicles attacked the villages of Al-Hima, Al-Manzal, Al- Khuza'ah, Al-Khums, Al-Saila and Al-Shaqab. In addition, they stormed the villages of Qiyad, Al-Muqhan, Al-Muqrin and Wadi Al-Dera'a and set up a number of checkpoints on the roads and outlets leading to these villages, to tighten the noose around the residents and make them completely besieged. As a result, they were even deprived of the right to displace to another place.

Rights Radar monitors reported that Houthi gunmen randomly targeted the villages of Al-Muqrin, Qiyad and Al-Maqhan, and Wadi Al-Dera'a with various bullets and artillery shells. This resulted in killing 8 civilians, including 2 women and 2 children, and injuring more than 25 others.

In addition, Houthi gunmen attacked villages in Al-Hima District, including Al-Manzil, Al-Khuza'ah and Al-Khums. They stormed more than 105 homes and abducted about 150 civilians. The monitors confirmed 65, including 5 children. Some of these abductees were sent to Houthi prisons in Al-Saleh city, east of Taiz.

Some residents told Rights Radar monitors that the attacking and storming campaign resulted in the displacement of about 30 families. In addition, 9 houses were subjected to looting and destroying their contents and 3 houses were burned. Moreover, dozens of houses were destroyed as a result of the indiscriminate and direct shelling and 17 houses, at least, were confirmed.

Residents confirmed that Houthi gunmen were stationed in 3 schools, namely Al-Hima, Wadi Al-Areeq and Al-Majd. Al-Majd School was used as a prison for many abductees. They also used some of the houses in Al-Sayleh village as places to station in. This made its residents be human shields.

These residents added that Houthi gunmen forced some residents of Al-Hima villages, at gunpoint, to record videos for denying what their villages were subjected to and what they witnessed regarding killings and abuses.

Rights Radar has documents confirming that Houthi gunmen committed killings and abuses against citizens in Al-Hima who tried to stand up to the Houthi campaign. There are also some pictures showing bodies of other victims hanged on a tree.

In fact, the situation in the villages of Al-Hima District, Taiz is a real tragedy and the abuses can be considered war crimes because there is a clear violation of the principles and values ​​of International Humanitarian law that requires preserving the dignity of the human being whether alive or dead. In addition, the victims are unarmed civilians.

Rights Radar calls on the Houthi militia to put an end to the abuses committed by its gunmen against the unarmed civilians, especially these acts are imprescriptible crimes and the perpetrators are subjected to legal accountability locally and internationally.

Rights Radar also calls on Martin Griffiths, the UN envoy to Yemen, to take his humanitarian and moral responsibility towards the civilian victims due to abuses committed in the villages of Al-Hima, Taiz Governorate.

Rights Radar called on the Yemeni government to do its duty towards its citizens who are subjected to daily abuses in areas under the control of the Houthi gunmen and others.